In a rush? Our top choice is the Baratza Virtuoso+.

Baratza is the leader in home grinders. And they have a number of great choices.

Two of the best choices are Encore and Virtuoso+.

Let’s settle this Baratza Encore vs Virtuoso+ debate once and for all.

I’ll give you a rundown of each one, then go through their features to declare a winner. 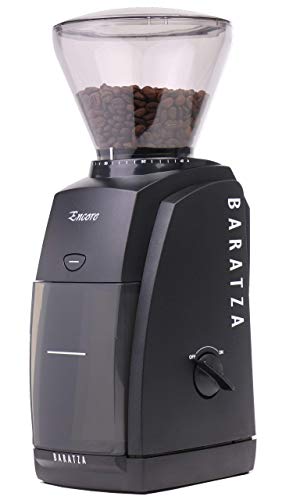 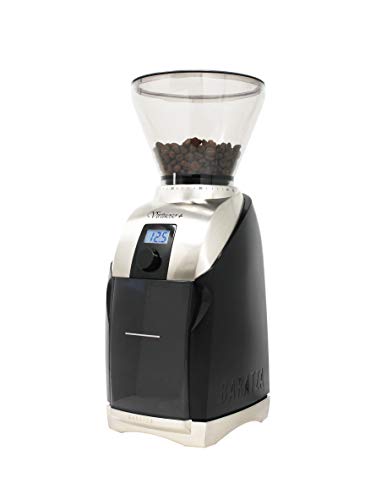 Let’s Chat About The Baratza Encore

Baratza has been around for more than 20 years. And they’re a dedicated coffee grinder company. That means they only make grinders.

Is that a good thing?

In my opinion, yes. That means this company is totally focused on making the best coffee grinders and not other things like brewers or accessories.

The Encore is Baratza’s entry-level grinder. But don’t let that scare you off.

Entry-level, in this case, doesn’t mean low quality. Just the opposite. It means you get all the Baratza quality at a lower price.

Just without all the frills and extra features.

BEST FOR
Someone just starting to get into home brewing. Or for someone who wants a budget-friendly daily grinder.

Brief Intro for the Baratza Virtuoso+

The Virtuoso+ is Baratza’s step up from the Encore.

It has all the features of the Encore, plus a few extras that give it a higher price point.

It features a stainless steel top and base, an updated burr design, and a 40-second timer for grinding.

It still has 40 grind size settings, conical burrs, and an 8 oz coffee bean hopper with a 5 oz collector.

The Virtuoso+ looks and feels like the Encore, but is updated and with heavier-duty materials.

BEST FOR
A home-brewing enthusiast who wants to upgrade their grinder. Or for a beginner with the budget to spend on a professional-grade grinder.

The Encore and the Virtuoso+ are very similar machines.

After all, they have the same design, grind settings, hopper and collector, and style.

But there are some key differences that set them apart. And give the Virtuoso+ its price point.

Those differences, though small, are significant.

Let’s get into those differences.

The reality is that the Baratza Encore coffee grinder is a super durable machine. I’ve used mine every day for three years, and there isn’t a scratch on it.

That being said, I’m pretty careful with my grinder and don’t leave it in the sun or move it very often.

The Virtuoso+ has the same design as the Encore, but the top and base are made from stainless steel instead of plastic resin.

The main part of the body on the Virtuoso+ is made from the same plastic as the Encore.

The hopper and collector in the Virtuoso+ are the same ABS tinted plastic as in the Encore. It gives your coffee the same protection against UV rays.

WINNER
I’m going with the Virtuoso+ for the extra stainless steel pieces added to the body. It gives it a little extra durability, which is perfect for busy kitchens or heavy use. But the Encore is still an incredibly durable machine that can stand up to a lot.

How fast and noisy are they?

Noise is a big concern, especially if you live with other people. Who wants to wake up roommates every morning with a loud grinder?

From personal experience, the Encore is loud enough to wake up a roommate if they sleep right next to the kitchen. But if you have thick walls or if the kitchen is separated from the bedrooms, then the noise isn’t much of a concern.

But it’s still quieter than the hand grinders I keep around.

The Virtuoso+ has the same gearbox as the Encore, meaning it will produce the same level of noise.

PRO TIP
You always know when your beans are done grinding. The sound will change from grinding to the same pitch as a ringing telephone.

The speed is a little different between these machines.

Does this speed really matter?

Kind of. The Virtuoso+ has a higher speed, which means your beans will grind a little faster than in the Encore.

But in reality, the time it takes to grind isn’t that significant and is really just a selling point Baratza uses to separate the two.

Both grinders grind at 550 RPMs, it just takes the Virtuoso+ less power to reach 550 RPMs.

WINNER
It’s a virtual tie, but I’ll give the win to the Virtuoso+ the edge for the slightly higher speed.

Do they have the same functions and settings?

I’ve mentioned the 40 grind settings a few times in this article, but what does that actually mean?

It means you get 40 different grind sizes with each machine. That’s enough range to grind anything from espresso to grinding for cold brew.

And that’s crazy versatility from any grinder.

So, if both the Encore and Virtuoso+ have the same grind setting, what sets them apart?

That would be the on/off switches.

The Encore has two switches: one button for on-demand grinding, and one manual on/off switch.

That means you have to manually turn off the grinder when your beans are finished grinding.

The Virtuoso+, on the other hand, has the same on-demand grinding button. But it also has a 40-second grind timer.

That means your grinder will automatically stop grinding after 40 seconds.

In practice, though, 40 seconds is much longer than you’ll need to grind for one or two doses at a time.

Anything more than a couple of doses at once in either machine and you run the risk of overheating your grinder.

Baratza even says to only grind one dose at a time.

WINNER
I’ll go with the Virtuoso+. Only on the off chance that you forget your grinder is running. If you do forget, the Virtuoso+ will shut off eventually, while the Encore will keep running until you remember.

Is the grind quality the same?

In the coffee industry, when we talk about grind quality, we really talk about two things: consistency and fines.

What are fines, you ask?

They’re the little particles of coffee grounds that end up in your cup.

If you’ve ever reached the bottom of your coffee and noticed a gritty texture, that texture comes from fines.

Consistency is seen before you brew. Are all the pieces of ground coffee the same size? Are there some bigger than others?

If some pieces of coffee ground are bigger than others, we call that an inconsistent grind.

Why is consistent grind important? Because it changes your extraction and affects the taste of your coffee.

The reality is that the Encore and Virtuoso+ are two extremely consistent grinders.

Why are they so consistent? Because of the conical burrs.

Burr grinders use two interlacing pieces that crush the coffee bean instead of chopping it like in a blade grinder.

Any home brewer that cares about their coffee should have a burr grinder.

The difference between the Encore and the Virtuoso+ is in the burrs.

Both burrs are made of durable stainless steel.

But Virtuoso+ is more consistent in the long run.

The Encore’s burrs get less consistent as they age, meaning it takes more maintenance and cleaning to keep them running well.

Because of the sharper burrs in the Virtuoso+, it retains its consistency for longer than the Encore.

(But you should still clean your grinder regularly, regardless of which one you choose!)

WINNER
I’m going with the Virtuoso+ again, only for the fact that it takes less maintenance over the course of its life to stay consistent.

How expensive are they?

The price difference between these machines is a little jarring.

I’m not convinced that the Virtuoso+ is that much better than the Encore to justify how much more expensive it is.

To be honest, I believe the Encore is a much better value for the money than the Virtuoso+.

However, Virtuoso+ is a more durable and more consistent machine. But you only see those results if you have your machine for a long time.

I’ve had my Encore for nearly 4 years at this point, and only in the last couple of months have I noticed any reduction in consistency.

WINNER
It has to be the Encore. The value for the price of the Encore is incredible. And not just when compared to the Virtuoso+. As far as the grinder market goes, the Encore is one of the best values you can find.

The bottom line is that these are two phenomenal grinders.

But the Virtuoso+ is the better grinder. The stainless steel top and base, the 40-second timer, and the updated burr design make it one of the best grinders available.

However, choosing the Virtuoso+ over the Encore isn’t going to make or break your coffee setup.

In fact, I’d go so far as to say that either one will actually improve your coffee setup.

However, you should go with the Baratza Encore if:

And you should go with the Baratza Virtuoso+ if:

Personally, I use my Encore every day and have zero complaints.

But if I ever upgrade, it will be to the Virtuoso+.