TL;DR? The Jura Z6 is the winner in this showdown.

The Swedish coffee machine manufacturer, Jura, has become famous in the world of coffee.

That’s thanks to their mean machines that can whip up coffees that’ll make your barista swoon, all from the comfort of home!

Two of the more popular coffee machines Jura has come up with are the Z6 and the Z8.

Now, while the two have a lot in common, they’re definitely not the same machine. And, if you’re going to purchase one of them, it pays to know the differences so you can pick the right one.

Luckily for you, I’ve done the research and boiled the details down to one clear winner: the Z6.

If you’re ready to make an informed purchase and get a clear sense of why this one comes out the winner, keep reading.

Here’s the complete breakdown of the Jura Z6 vs Z8. 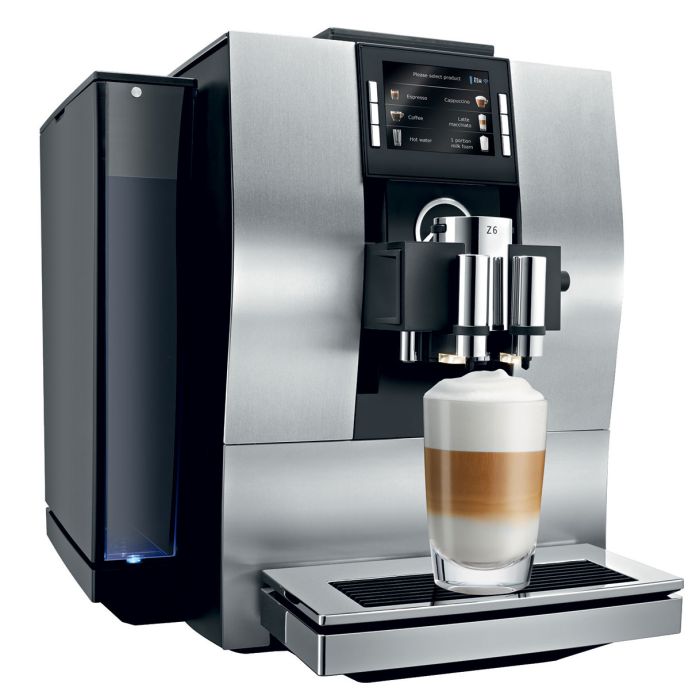 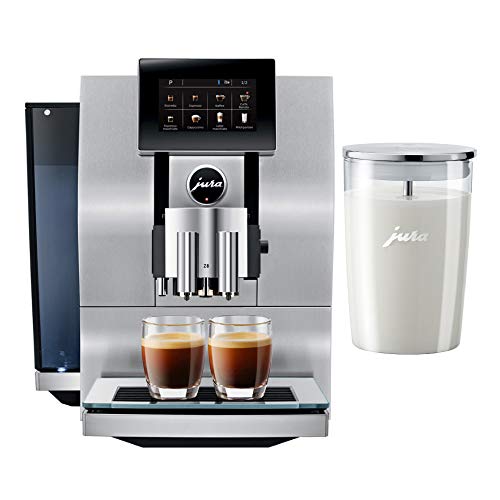 The Jura Z6 was released in 2021 as a part of the general Z series. The machine, made out of aluminum, is a super-sleek device.

Not only does it whip up 13 different delicious drinks, but it looks cool doing it, too.

The machine features both a built-in grinder as well as a built-in milk frother. It was designed for home use thanks to its 9oz bean hopper and 81oz water tank.

Let’s take a closer look at the pros and cons of this machine.

The Jura Z6 has tons of benefits that really make it a standout machine. Even though it’s not as high-tech as some of the other Jura espresso machines on the market, it’s got plenty of perks.

Built-in Grinder: coffee machines with a built-in grinder give you the benefit of knowing your coffee is as fresh as possible.

And, you won’t have to refill the grinds every time you want to make a cup of Joe; the machine does that for you.

Better yet, the Z6 has active bean monitoring technology. That means that the machine tells you when you need to refill the bean hopper.

Easy to Use: The Jura Z6 comes with a color display touchpad that makes it easy to brew your coffee.

It’s a super automatic machine, which basically means you just have to push a button. Voilá! You’ve got a steaming cup of coffee.

Even though you can program your drinks, you don’t have to. It’s a great machine regardless of whether you want to get creative or not.

Super aromatic coffee that preserves all the flavor of the beans.

You also get that gorgeous crema on your espresso – perfect for latte art!

Easy to Clean: The Jura Z6 comes with auto-cleaning functionality.

Not only will the machine tell you when it’s time to clean the device, but it takes care of the cleaning, too.

All you have to do is pop a cleaning puck into the machine and hit the run cycle. From there, the machine does the rest!

True, it doesn’t offer as many drinks as some of the other Jura machines. However, the drinks it does make, it makes like a dream.

Now, despite all the good qualities that the Z6 has, it’s also got a few downsides.

The Size: For one thing, the Jura Z6 is a pretty hefty machine. That’s considerable to note, especially since it’s supposed to be a machine for personal use.

The machine weighs a little over 25 pounds and is 17×12 inches in size. That makes it a bit larger than I’d like, especially for anyone who, like me, has limited counter space.

The Maintenance: Another issue with the Jura Z6 is that maintenance doesn’t come cheap. Although the machine does have a self-cleaning feature, if things go awry, you’ll find machine parts are pricey.

For me, that was a bit disappointing since I’m already investing a lot of money to purchase a coffee machine.

The one thing that eased my pain here was that the machine comes with a warranty. And, you can extend that warranty if you’re really worried.

The Jura Z8 is one of the more recent Jura products, which means it comes with more recent features, too.

The machine is a luxurious, super-automatic machine. It has some high-tech features coffee fanatics will love.

One of the major improvements to this espresso machine is that it has 21 different pre-programmed drink options. And, it has a larger bean hopper so you don’t have to fill it as often.

With all that in mind, let’s check out some of the pros and cons of the device.

First, let’s look at the benefits of the Jura Z8. This machine offers quite a few added and enhanced features.

Easy-to-Use: Like the Jura Z6, the Jura Z8 is a super automatic coffee machine.

You can make a beverage with just the touch of a button. That makes it easier than ever to whip up your drinks!

Don’t think you’ll have to sacrifice customizability, either.

You can actually still customize your drinks a ton (if you want to). The machine lets you adjust water temperature, grind size, and a whole bunch of other features.

Now, I’m all about saving our planet, so that’s a bonus in my book!

Multi-Level Grinder: Although the Jura Z8 also features an aroma grinder, it has an added benefit. The Z8 features a multi-level grinder.

Because there are more blades layered on top of each other, it’s harder for large chunks of beans to slip through the grinder.

You get a much smoother and finer grind than with a single-level grinder.

Touchscreen Display: The touchscreen display really is a huge benefit of the Jura Z8. This machine’s display makes it even easier to use than the Z6.

The touchscreen display is a lot more intuitive than manual buttons, too. And, you can easily navigate through the menu if you get confused.

I also think the touchscreen display is just easier on the eyes.

If you’re worried about reading tiny print or dimly lit screens, the touchscreen will ease your concerns.

The Price: this espresso machine is significantly more expensive than the Jura Z6.

While it does have a few added features, in my opinion, they don’t outweigh the price increase.

In fact, the Jura Z8’s price is comparable to some of Jura’s machines for office use. But, the Z8 only provides enough capacity for home-based brewers.

The Drink Options: Despite the fact that the Jura Z8 can brew 21 drinks, it actually lacks a bit of versatility in its drink options.

What I mean is that some of the more popular options are missing from its one-touch menu.

For instance, you won’t be able to make:

Although that’s not necessarily a dealbreaker, it can be a bit of a nuisance if you like your coffee strong.

Tough to Clean: The Jura Z8 has a super-sleek look. However, that same swanky look causes a bit of trouble when it comes to cleaning.

The device features a few odd divets and dips around the water tank.

Those divets can be a bit tough to clean when you’re wiping down the machine. If you’re not careful, milk and coffee spills can build up and create grime in those nooks.

Similarities Between the Jura Z6 and Jura Z8

Now that you’ve got a good picture of what the Jura Z6 and the Jura Z8 are like, let’s compare them.

These machines do share a few similarities. That includes their water reservoir, cleaning systems, and programmability.

Both the Jura Z6 and the Jura Z8 have an 81-ounce water reservoir (more or less). That’s large enough that you’ll be able to get quite a few drinks out of it before you refill it.

If you’re living in a one or two-person household, you’ll probably have to fill the tank every week or so.

Both the Jura Z6 and the Jura Z8 have integrated cleaning systems.

All you have to do is pop a cleaning puck into the intelligent water system and set it running!

From there, the machine will handle the rinse, cleaning, and descaling cycles. It takes a ton of the work out of keeping your Jura espresso machine running.

Despite the fact that the Jura Z6 produces a little more than half the number of drinks as the Z8, they’re both pretty programmable.

You can also save your preferences so that you can come back to your favorite beverages. Those factors combined make for a pretty good level of customizability in both machines.

I do have to mention that the Z8 doesn’t have as many double-shot drink options. If you really like strong coffee, make sure you’re aware of this flaw in its programmability.

Differences Between the Jura Z6 and Jura Z8

Despite what it might look like at first glance, the Jura Z6 and the Jura Z8 are not created equal.

For instance, the grinder, heating method, and screen are all different on the machines.

Let’s take a closer look at a couple of the major differences between the two devices.

The grinder on these devices is a bit different.

The Jura Z8 has a multi-level grinder while the Z6 only has an aroma g3 grinder.

What does that mean?

It means that although both grinders are designed to preserve the coffee’s aroma, they don’t get the same grind consistency.

Another difference between the Jura Z8 and the Jura Z6 is the heating system.

Although it’s actually pretty minimal, this does affect the brew time. Since the Jura Z8 can heat the milk and the water at the same time, you’ll wind up waiting less time for your coffee.

Still, the difference is only about a minute.

If a slightly longer wait doesn’t bother you, you probably won’t notice much difference between the Z6’s system and the Z8’s.

The final major difference between the Jura Z6 and the Jura Z8 is the screen.

The Jura Z6 features a simple touchpad. Although it looks like a touch screen, this is actually programmed using manual buttons on the sides of the screen.

The touchpad is great because it doesn’t overwhelm you with tons of different buttons to press. Instead, you get simplicity and an easy-to-use device.

In contrast, the Jura Z8 has a touchscreen. The touchscreen allows for more programmability as well as connectivity to the Jura coffee app.

Finally, the Jura Z8’s touchscreen is a bit larger.

If you struggle to read the fine print and small lettering, you may find that the touchscreen is a better choice for you.

When it comes to Jura Z6 vs Z8, the Z6 comes out as the clear winner. Although the Z8 has a few added features, these are more nice-to-have than must-have.

And, when you consider the hefty increase in price, it just makes a lot more sense to purchase the Z6.

What you’ll end up with is a well-rounded Jura coffee machine that can whip up any number of espresso-based drinks as well as black coffees.

Regardless of what your go-to drink is, the Z6 will give you a high-quality beverage that leaves little to be desired.

Whether you’re a beginner home barista or an experienced coffee lover, you’ll be sure to love it!